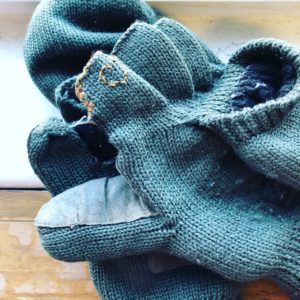 Prepare ye the way of the Lord! Yes!

The season of advent is all about preparing our hearts and soul for Christ’s light in our lives.

We draw closer to the Divine through beautiful décor, advent calendars, parties, pageants, and carols,

All joyous and fun activities.

Something we probably won’t find in the attic or sold in the stores.

The lectionary this advent season focuses on John the Baptist –

The messenger who made way for Jesus.

John the Baptist is so key that we even have a miraculous birth story about him!

His father, Zechariah, was a priest.

When he learned that his barren wife, Elizabeth, was to bear a child, he did not believe –

So an angel struck him mute.

We don’t know if Elizabeth was happy or upset by her husband’s 9 months of silence.

This morning’s scripture is the song Zechariah spoke after John was born.

and a prophecy of who John the Baptist would be.

In it we hear a key step to preparing the way for the Divine to enter our hearts at Christmas.

John will go before the Lord Jesus and “prepare the way”

“By the forgiveness of sins”,

So that the people might be guided “into the way of peace.”

This scripture was written in Greek and the word for “Peace” (eirene, ay-ray-nay),

Comes from the verb (ay-roh), “which means ‘to join’ or ‘to tie together into a whole.’”

This word history was brought to my attention by the “Anti-Advent Wreath” blog I mentioned last week.

This blog explores the weekly words of advent by examining their opposites.  [read here]

So, if peace is “to join” or “tie together into a whole”, then its opposite is separation.

“Separation works to undo everything that holds us together with each other, within ourselves, and with God.

Peace ties the world back together. 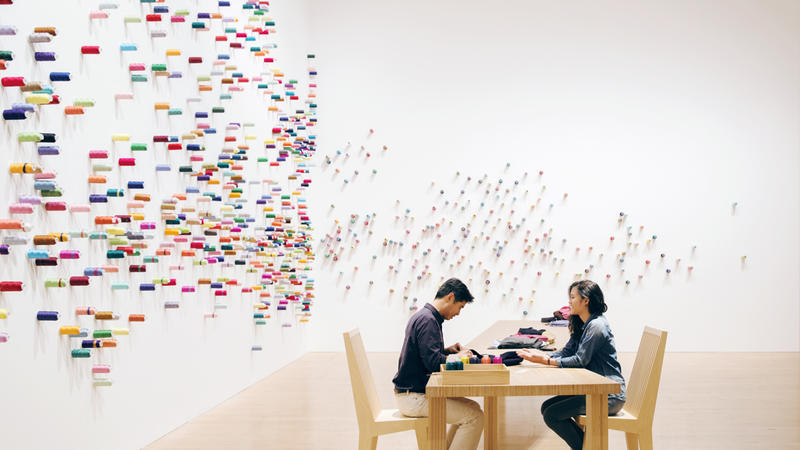 There is a neat art project going on at the Isabella Stewart Gardner Museum in Boston.

It is called “The Mending Project”

People bring an article of clothing that needs mending.

They sit across from a mender and while the mender repairs the clothing,

When the mending is done, the clothing is attached to a thread that is bound to a wall.

As the project goes on, more and more threads are woven together.

The artist who developed the project, Lee Mingwei, explains,

“The gesture of mending for me has different levels of meaning.

The most obvious is that a piece of clothing is broken and needs repair.

It could also be in a completely different conversation about how the world is today.  There are so many things that are broken in the world now, with politics, the climate, relationships between people, between countries.

Can we do something about it?

I know I am just an artist and all I can do at this moment is something close to me.

So let me start with our second skin: the clothes that we are wearing.”

There is power and peace in mending.

While I have not witnessed the Mending Project in person in Boston,

Two winters ago I experienced a personal mending project when my dear friend, Janet,

Saw the start of my beloved mittens/gloves.

She volunteered to take them home and mend them –

And she did so with love, even sewing a heart onto the finger.

The gratitude I felt for such a simple act was immense.

There is power and peace in mending.

Which lead to John the Baptist’s core means of preparing the way for Jesus, the prince of Peace:

As his father Zechariah prophesized:

John will go before the Lord Jesus and “prepare the way”

“By the forgiveness of sins”,

So that the people might be guided “into the way of peace.”

The way of peace, mending, is walked by the forgiveness of sins.

Many a relationship – romantic, friendship, community –

fall apart when there is a lack of confession and forgiveness.

Nearly every deep relationship goes through a period of tension or disagreement:

Conflict is natural and ultimately leads to a more profound relationship –

As almost every theory of groups or relationships describes.

When conflict inevitable arise, the key is to practice peaceful mending

Instead of giving into fearful separation.

Confession is acknowledging our own role in separation, voicing it, and apologizing to God and others.

Confession, however, comes from a place of worthiness.

Just because we did something wrong does not mean we are unlovable or unworthy.

Confession is acknowledging we have done something to harm another,

And because we are ultimately good and worthy people,

We know we can do better.

Confession is grounded in humility,

noting why it happened and how we intend to change the action in the future.

Confession is vital to mending peace,

for in confession we are relieved of the guilt and burden of our mistakes.

If confession is one step on the path to peace, forgiveness is the next.

Forgiveness is acknowledging the humanity in ourselves and others,

Naming the wrongdoing, grieving the hurt,

and then letting the past no longer plague the present.

Forgiveness cannot be forced or rushed,

But is a prayerful process that takes time.

Forgiveness often comes when we are able to see a different perspective.

Seeing a different perspective takes time to listen and learn and sit with God.

Forgiveness may invite us to acknowledge the ways another reacts to wounds in an unhealthy way.

Forgiveness may call us to clarify new boundaries that protect and build trust.

Once forgiveness is granted, we receive peace –

For forgiveness frees us from past harms and allows us to embrace the present.

Forgiveness is so key to peace that it is a major part of the 12 steps program for addicts.

Making amends frees one to enter a new life of peace.

It is no wonder that John the Baptist preached a forgiveness of sins.

In practicing confession and forgiveness, we prepare the path to peace in Christ.

It may not be as fun as the other holiday preparations,

But confession and forgiveness have the power to bring deep peace.

May we practice mending this season;

May we be a mending people, a people of peace. Amen.

Grow with Your Faith Family

Pursue a Just World for All