To be honest, Friday’s strike for the planet wasn’t much of a strike for me. Friday is my day off to catch up on adulting things like bills and housework (who doesn’t want to strike from housework?!). In any case, advocating for the least of these in the public sphere is part of my “job” as a Christian minister. So, not a strike for me, but certainly a strike for the union workers present. Certainly a strike for the thousands of young people who were out of school for the day trying to raise awareness about climate change and calling elected representatives to take swift action to keep fossil fuels in the ground and invest in renewable resources and green jobs. 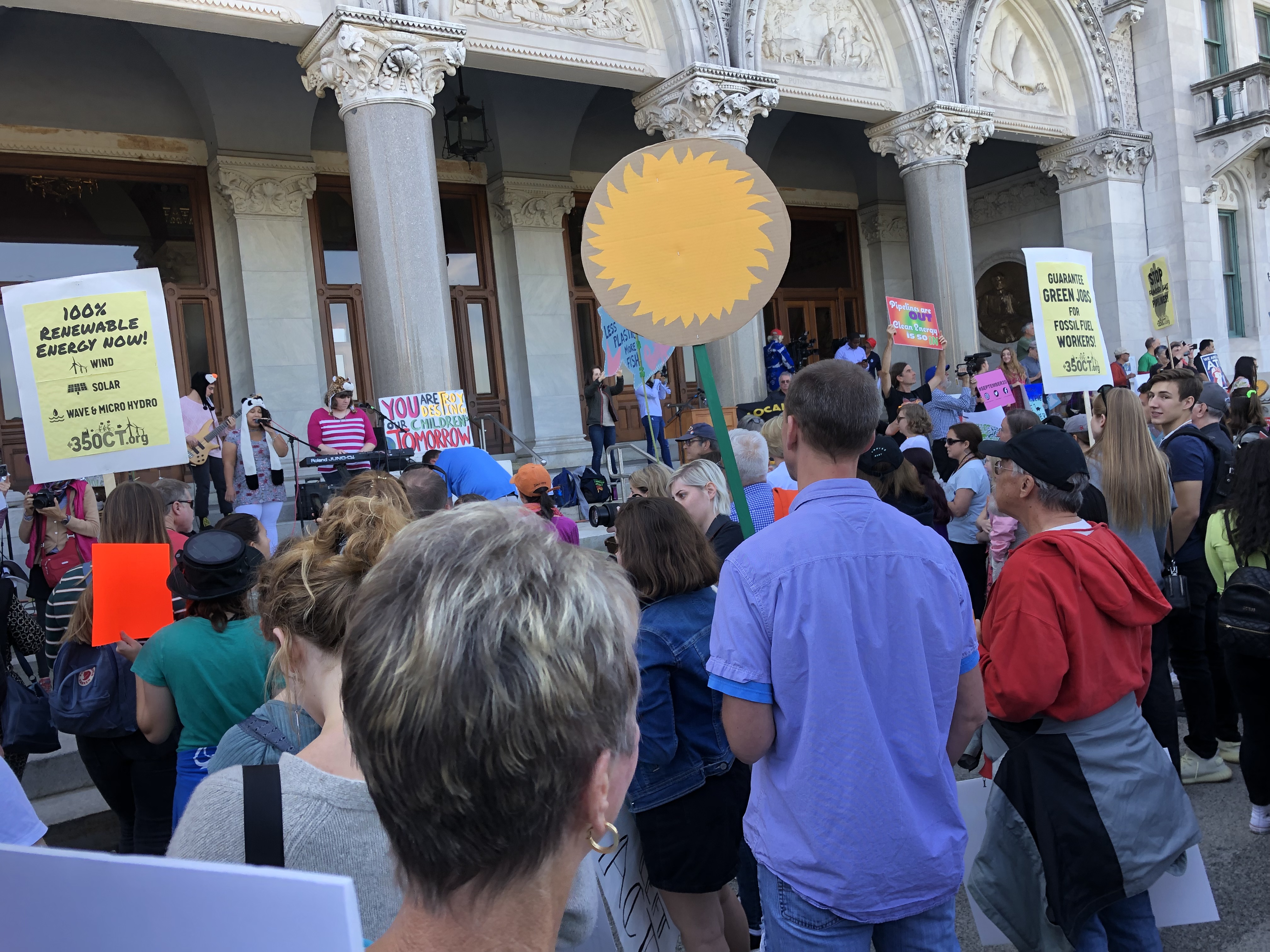 The youth really did take the lead. They orchestrated it so that the clergy and older participants started at the steps of the capital in Hartford. Then a stream of youth came up the hill chanting and cheering. Seeing so many young passionate activists brought tears to my eyes. First: I realized I’m getting old at 32. Second: their energy and determination gave me hope that change is possible. The rally was certainly a change from every other rally I had been to. 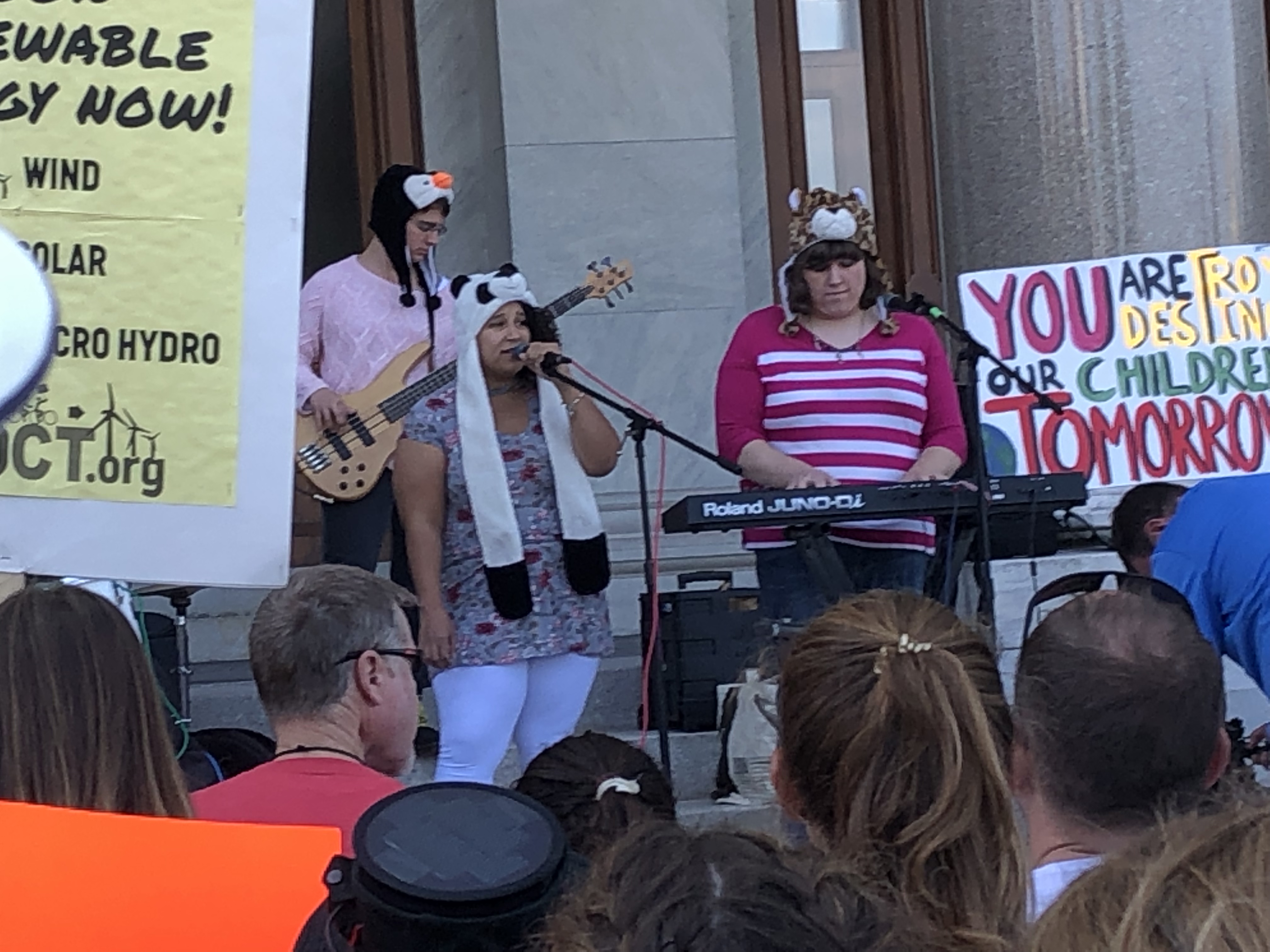 The music was fresh and fun.The band wore animal hats. We did Tai Chi at one point. The Holy was palpable.

Nearly every speaker was a teenager. They passionately shared what scientists have said for years. There is 11 years left for us to change course and stem the impacts of climate change. Climate Change has caused an increase in the number and severity of extreme weather, like hurricanes, flood, and drought. As such, climate change has created 20 million refugees – more than any war. The poor are the worse hit because they don’t have the resources to flee or rebuild. 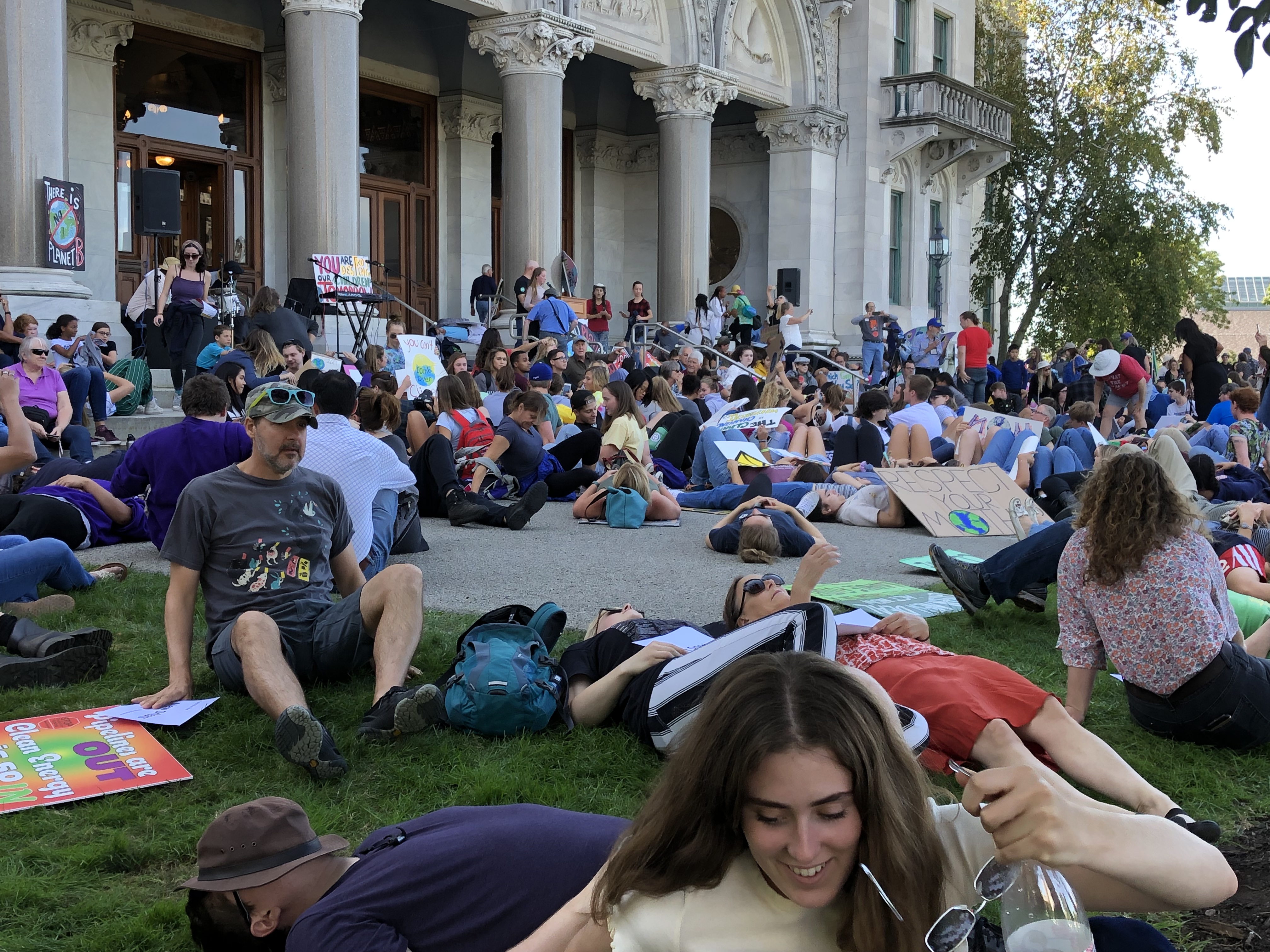 As the teenagers so bluntly said, “climate change is killing us.” So the rally ended with a “die in”

Hundreds of people laid down on the cold earth in front of the capitol. The speaker read the death toll from recent extreme weather events. Then there was 11 minutes of silence. 11 years left to change course. In the silence the words of Jesus from Matthew 25 fell on my heart, “whatever you did for the least of these, you did to me.” 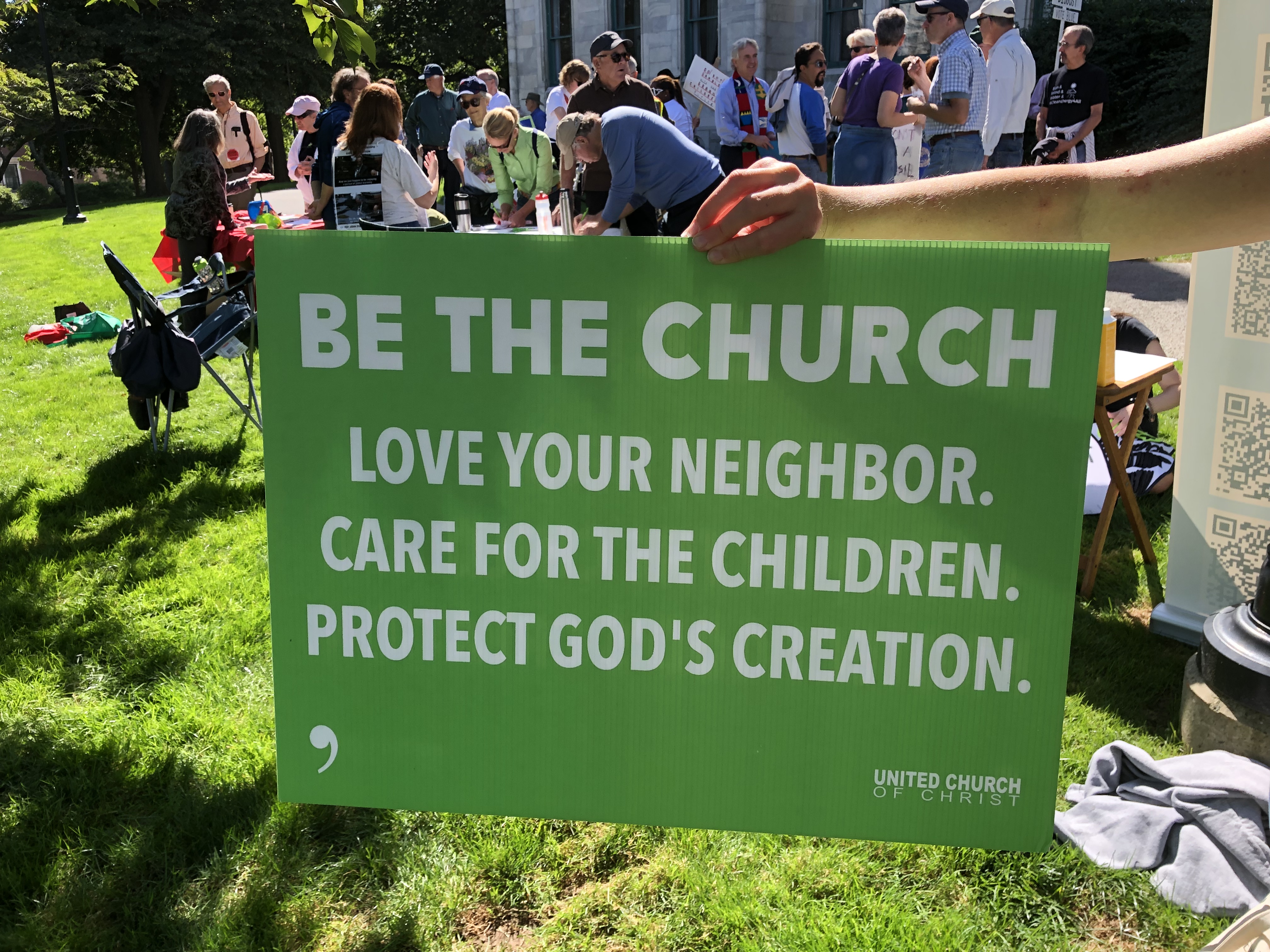 As people rose up, there were tears and determination. There was passion and hope in the air. How could there not be when so many hopeful teenagers had taken to the streets to act? 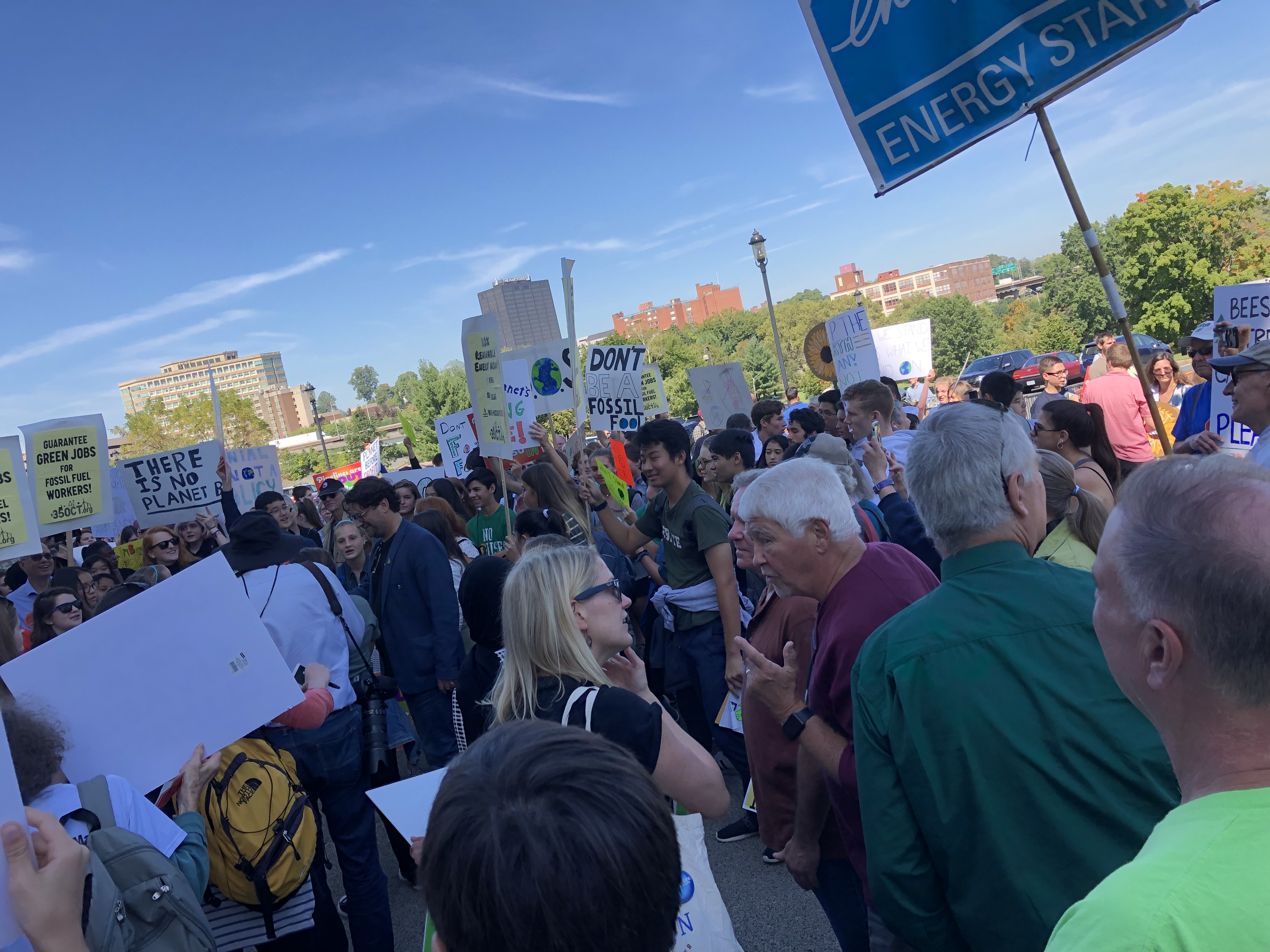 I wore my stole, as I often do when out bearing public witness, striving to bring our world closer to God’s reign of love and justice for all. It was the stole given to me at my ordination, with animals, a cross and a recycling sign sewed with love by the church that raised me. A number of people came up to talk to me. They were curious which church I was a part of. I was happy to tell them about our congregation and the budding green team who had successfully banned styrofoam, moved most church functions to reusable plates, and supported the community garden.

I’m wondering about what is next. Will we mobilize for a green new deal to make sustainable green jobs and stem the extreme weather brought on by climate change? Will we divest from fossil fuels? Will we eat more local food (cutting down on transportation)? I’m thinking of forgoing my car for awhile and riding my bike to church. 11 years. What will we do? What will you do?

Grow with Your Faith Family

Pursue a Just World for All